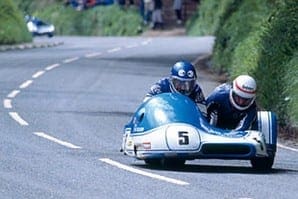 The duo, captured here in the fast sweeping Glen Helen section, took victory on an all British outfit, the Barton Phoenix which was powered by Barry Hart’s 750cc engine, originally housed in the Silver Dream Racer solo ‘ridden’ by David Essex in the movie of the same name.

Nigel was also a very handy solo rider, before turning his skills to three wheels, with a third place finish, and the Newcomer’s Award aboard a G50 Metisse, in his debut Manx Grand Prix, aged just 19. In 1971 he went two rostrum steps better, winning the Senior race on an oversize TZ Yamaha.

In winning the Sidecar TT and a solo Manx Grand Prix Nigel also shares the honour of being only the second man to win on two and three wheels around the TT Mountain Course, the other being the late Freddie Dixon who took top spot in both sidecar and solo TT races.

Still competitive, Nigel gets his kicks racing, and winning, on the water in offshore sailing yachts and he is the current president of the TT Riders’ Association.