Four of the stars of the iconic Bruce Brown motorcycling movie from the Seventies, On Any Sunday, are to be guests of honour at the Carol Nash Classic Mechanics Show, held at Stafford County Showground, over the weekend of 15-16 October. 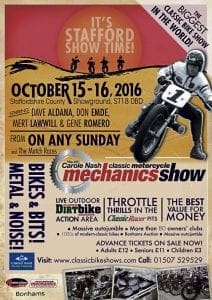 Making the journey across the Atlantic will be Don Emde, David Aldana, Gene Romero and Mert Lawwill. During the film – the making of which was part funded by Hollywood golden boy, Steve McQueen, who had a real passion for motorcycling and also appeared in the movie – the cameras followed Harley-Davidson rider, Mert Lawwill, during the defence of his AMA Number 1 plate.

All four riders will also bring back great memories of the Anglo American Match Races, held at Brands Hatch, Mallory Park, and Oulton Park, in which they all appeared during the Seventies, giving British fans a first look at what talent there was on the USA circuit.

Read more in the latest edition of Classic Racer.