TT podiums, 500GP world championships and a host of other duties. The Dugdale Maxton Yamaha TZ385 that served under Charlie Williams was far more than a one-trick pony.

Back in the days before anyone dreamed that Yamaha two-strokes would ever be venerated as prized collectables, the Dugdale Maxton Yamaha TZ385 that took Charlie Williams to a pair of second places in two Isle of Man TT races just five days apart, as well as 10th place in the 1974 500cc World Championship on the back of that and his fifth place in the Dutch TT three weeks later, was simply dismantled at the end of that year and its component parts were recycled by Dugdale’s for the 1975 season. 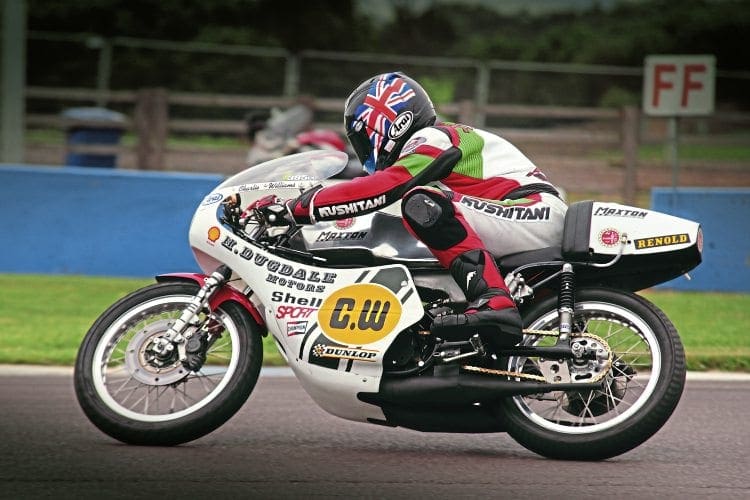 “It’s true – we just kept a few bits and pieces from that old bike, like the seat with the fuel tank in it and such, but with the crank gone after Eddie Roberts’ Manx GP ride, there was no enthusiasm for rebuilding the engine,” says Charlie.

“We’d certainly have retained the Maxton chassis, but the trouble is that Ron Williams didn’t number his frames, so it’s impossible to know what became of it. And the following season, 1975, was when Ron produced his first monoshock frame, which worked so brilliantly straight out of the box that I won the Junior TT on it.

“So after that we’d probably have sold that old twin-shock frame on to a customer. But when my pal Em Roberts phoned me up almost 20 years ago to tell me he’d found a Maxton chassis that was identical to the one we used for the TZ385, even down to the suspension, and asked me what I thought he should do with it, there was really only one answer: build another 385!” Em Roberts takes up the story: “I was quite excited about doing this, even if originally it was only going to be a demo bike for Charlie to ride in Classic parades. I’d hoped to get it ready for the Centennial TT at Assen in 1998, but I just ran out of time. The problem with the original
bike was that using the TR2 crankshaft was always a bit of a compromise in terms of vibration, and these weren’t easily available anymore, anyway.

Read more in the March/April issue of CR – out now!