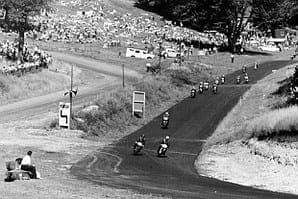 In a memorable day’s racing Cadwell Park got its first sight and sound of Jim Redman and the factory Honda four, who unsurprisingly dominated the 250cc race, romping home 43 seconds ahead of NSU mounted Dan Shorey and Norman Surtees aboard the Hailwood Mondial.

It was runner-up spot again for Shorey; this time on the Sheene Bultaco, in the 125cc race, with victory going to Rex Avery on the British built EMC. Both the 350 and 500 races saw Norton mounted John Hartle top the order each time, but only after he was made to work hard for the 350 victory by John Cooper, Dan Shorey, Peter Middleton, Roy Mayhew and Rob Fitton.

The 500cc race win was more of a runaway affair, with Hartle claiming the £100 first prize by 21.2 seconds. However, it was the scrap for runner-up spot, between Alan Shepherd (Matchless), Dan Shorey (Norton), Dennis Pratt (Norton) and Roy Mayhew (Matchless) which kept the huge crowd on their toes. The quartet finished in that order.

The question in the 500cc sidecar race was could Pip Harris vanquish BMW rival, and World Champion, Max Deubel? The answer was no, but he made the German work very hard for the win. Other Grand Prix sidecar aces had mixed fortunes on the testing Cadwell curves, with Swiss Florian Camathias overturning his BMW on lap two, and Fritz Scheidegger, also BMW, charging through the field, from last away, to finish sixth.

The picturesque Lincolnshire circuit, which remains largely unchanged since 1961, celebrates its 80th anniversary on August 3 with special parades and classic races.

? More images are available from the Mortons Archive