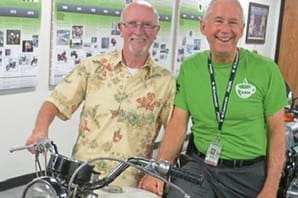 Martin Carney and Walt Fulton represented some of the earliest days for Kawasaki in Grands Prix and American road racing on their three cylinder two-stroke 500s, and both of those long-time Kawasaki employees were present.

There is a museum off the entrance and there were patches, leathers, and machines from every era of Kawasaki’s road racing success. The more impressive included Scott Russell’s Muzzy Kawasaki ZX-7R, winner of the 1995 Daytona 200 and Eddie Lawson’s 1982 KR-500 square 4 rotary valve two-stroke that was used in the 1982 AMA Formula One series.

There were also a number of more recent bikes ridden with great success by Eric Bostrom, Jamie Hacking, and the Hayden brothers.

Others of great importance in Kawasaki history were present including Nick Nichols, designer of the distinctive K company logo; also Mike Vaughn, the marketing wizard who having rejected the original name for the machine, suggested calling it a Ninja. The first to carry that name was the 1984 ZX900-A1 Ninja, and the name quickly became synonymous with high performance motorcycles.

Masa Nakagawa, president of Kawasaki Motor Corp USA, was there to present awards to the racers. As you might expect, cupcakes with green frosting were served.