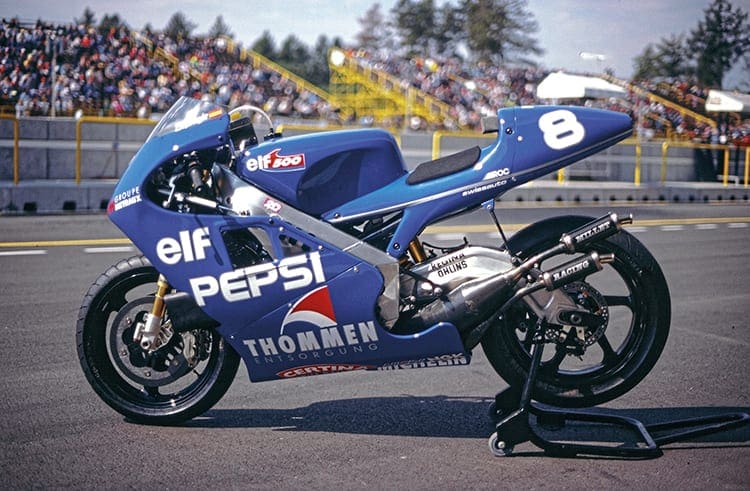 It may have been nearly 200bhp and needed extra weight adding to get up to the 130kg minimum, but the Elf 500 was born of sidecar tech. Kind of.

The heart of any motorcycle is its engine, but all the more so in the case of the Elf 500, whose wide-angle Swissauto V4 motor gave rise to the whole bike’s creation. Yet, while the engine appeared at a cursory glance to follow the conventional Made in Japan route, it was far from effectively being a clone of a Yamaha (as the Cagiva certainly had been) and neither was it a Honda copy, as the Paton was unjustly tagged – when in fact it was Honda that had copied Paton!

The Elf V4 represented 500cc Grand Prix racing the European way, breaking new ground with technical innovation that worked – albeit by no means as radical as the series of hub-centre, Honda-powered Elf racers of the previous decade.

For a start, the Elf 500’s Swiss-made single-crankshaft crankcase reed-valve V4 engine was extremely light and compact. It scaled a whole 7kg lighter than a Yamaha YZR500 engine at 37kg (Max Biaggi’s World champion RSV250 Aprilia V-twin motor weighed 30kg!) and it was 130mm narrower than an NSR500 Honda and 100mm lower top to bottom than the Yamaha.

Unlike any other four-cylinder two-stroke 500 yet made, the Elf’s crankcases were split vertically rather than horizontally like all other 500GP motors of the day. Swissauto CTO Urs Wenger stated this was partly to improve crankcase stiffness, but mainly to enhance access to the engine – for example the crankshaft could be changed in just one hour. This was a key factor in determining the 108° included cylinder angle, which also allowed space for four large reed blocks and a row of powerjet-equipped Dell’Orto flatslide carbs that Swissauto cleverly combined into a single bank – the team fitted 39mm ones on faster tracks amd 36mm on slower ones, according to Wenger.

But while everyone else called the Elf/Swissauto engine a V4, Wenger insisted on labelling it a ‘deformed boxer’, because the two pairs of cylinders on each side of the motor fired together, opposed at 180° in terms of firing angle to their counterparts, just like the cylinders of a BMW flat twin. This resulted in the engine’s extremely distinctive gruff exhaust note from what was effectively a pair of V-twins mounted side by side on a common crankcase and firing 180° apart. However, Swissauto later introduced a Big Bang version of the engine, with the firing order closed right up with the intention of improving rideability. “We’ve already got more power from the Big Bang motor on the dyno, but we’re not really sure yet why!” admitted Wenger to me when I rode the bike in 1996. “We started out at with 90° firing angle, but if the riders say it makes a big difference, we’ll try a 60° format. But if not, we’ll leave it at 90°.”

Because of the extra vibration from the Big Bang version, Swissauto first needed to redesign the crankcases to incorporate a balance shaft in the 180° version of the engine, before messing about with the firing angle. This experimental motor was in the Elf 500 when I rode it, as raced by a solitary Chris Walker at Brno after team-mate Borja crashed there in qualifying, ruling himself out of the race with a hand injury. Fitting the balance shaft added 1.9kg in total to the weight of the engine – an acceptable penalty for reducing rider fatigue, as well as the risk of component breakage, said Wenger.