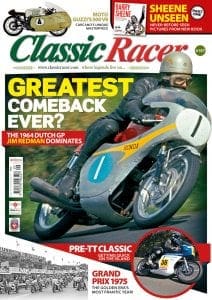 006 From the
Classic Racer archive

Two great moments from racing’s past that typify what we’re about. Both iconic moments captured by two of the world’s best motorcycle racing photographers. Each image is a snapshot of a much bigger story that shaped the racing world to come.

Another instalment of your thoughts on track-related life and the things that go along with it, be it in the past, present or future.

Mallory’s efforts for the Bonanza, loads of Classic TT news and Spa fall under Malc’s watchful eye this time.

Another beautiful example of Mick Ofield’s mastery with the line. Number 2 in the series and we’ve got a beautiful 1963 G50 Metisse for you to marvel at.

Would you like your issue of Classic Racer to arrive on your doormat earlier than you can find it in the shops? For a bit less money, too? Then here’s where you can get all the information you need for this to happen.

It’s a lifelong debate, but what do YOU think was the greatest one-time performance by a racer? Of all time? One Classic Racer writer says it’s a clear-cut case of one very special day in the hands of Mr Jim Redman. Feel free to write in and tell us why this assertion might not be accurate, in your opinion.

There are many reasons why this 1931 motorcycle has such a landmark place in the foundations of racing. And Alan Turner explains the story behind the two-wheeled mechanical marvel (for the time, for the time…).

Bloomsbury, the book company, has released the Barry Sheene tome that is an ‘Official Photographic Celebration’ of Bazza. We really like the book and enjoyed the pictures very much indeed. So much so that we’re bringing you a slither of the selection here, PLUS we have 10 copies of the book, signed by Freddie Sheene, to give away.

Under the skin, up close and very personal with the 1957 Moto Guzzi V8 500. Look at the exquisite cylinders. Go on, look at them. Aren’t they some of the prettiest things you’ve ever seen bolted to a motorcycle? Yes. We agree with you there.

The concluding part of a fascinating tale of two men’s dedicated pursuit of going fast and how it impacted on the racing scene of the time.

Important for many reasons – not least of all the huge grids of the time, but also because this year marked the end of the four-strokes for a long period in the premier class.

Because CR runs every couple of months, we’re tied to very long publication deadlines so occasionally events can only make the next available issue. Such as now. Here’s our report from the excellent John Watterson on the 2017 Pre-TT Classic event. Well worth the wait.

The sparsely-run return to the old days of the old boys taking on the young bucks headed North of the Border to get the action in Scotland and CR went along to watch. Just like old times in the company of Messrs Mackenzie and Carter.

Our very own Mark McCloskey has been watching the goings-on in classic racing on the Emerald Isle with interest. It’s been a helluva season so far and Mark brings you up to speed with what’s been happening on track and road.