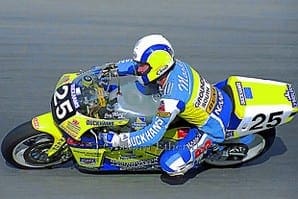 Among the attractions already lined up is the Flower of Scotland streamliner, which has been built to achieve more than 300mph on a one litre Kawasaki ZX-11 motorcycle engine, and a rally car driven in competition by the late Colin McRae.

Also confirmed as appearing are Scots road racing greats Donnie McLeod and Jim Moodie, pictured. McLeod was a star performer during the 1980s while multiple TT winner Moodie enjoyed massive success during the 1990s, including becoming the first rider to lap the Island course at over 120mph on a production bike.

Dozens of clubs and trade exhibitors are already booked and visitors can experience the sights, sounds and smells of classic racing bikes in the event’s Classic Racer Grand Prix Paddock. Off-road enthusiasts won’t miss out either, with a scrambles demonstration by the riders of the Scottish Classic Racing Motorcycle Club.

Anyone who’s wondered whether they’ve got what it takes to be a trials rider can find out at the show’s trials area and fire-fighters from Strathclyde Fire & Rescue will be demonstrating their ‘jaws of life’ equipment on a couple of unsuspecting car roofs.

The show is being run by the people responsible for the hugely successful Carole Nash International classic bike events at Stafford, the Mortons Classic Bike Shows team, with the added experience and know-how of Robbie and Margaret Allan, who owned and ran the Scottish Motorcycle Show for 25 years.

Mortons show manager Nick Mowbray said: “We’re going all out to make the Carole Nash Great Scottish Bike Show a world class event that you won’t forget. We’ve had a huge amount of interest in the show and it’s going to be crammed full of first rate attractions. It will be a mixture of classic and modern motorcycling.”