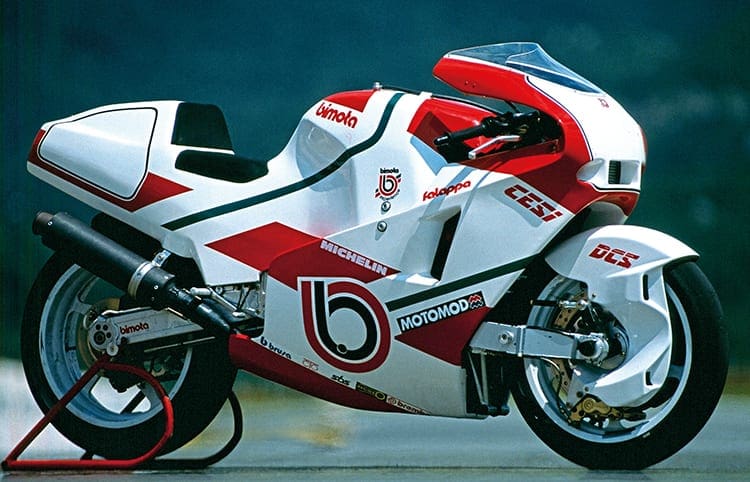 The oddest ball of all

Tesi means ‘thesis’ in Italian, and that’s how Bimota’s remarkable alternative motorcycle started out, as a combined effort between the company’s then-chief designer Federico Martini, and two Bologna University postgraduate students, Roberto Ugolini and Pierluigi Marconi, who spent six months during 1981-82 working in the Rimini factory as part of a work/study programme.

The hub-centre Tesi design they created there, based on a Kawasaki GPz550 engine, represented the design thesis for their IMechE mechanical engineering doctorate course, and their university’s computer was employed in the preliminary design work, on what was the world’s first motorcycle with hydraulically-operated centre hub steering.

The first running Tesi prototype appeared soon after Marconi joined Bimota full-time in 1983 and was the focus of much attention when it was unveiled at the Milan Show that year. Powered by a VF400 Honda V4 engine, the Tesi 1 was a street bike that covered several thousand kilometres on the roads around Rimini as a rolling testbed, before ending up as a static exhibit in the factory lobby, when it was superseded by the Tesi 2.

This also employed a V4 Honda motor, but one of an entirely different nature – a full-race 750cc Honda factory race engine purchased directly from HRC for endurance racing in the TT F1 class, in which the radical Bimota made its debut at the Austrian round of the World Endurance championship in June 1985 in the hands of development riders Davide Tardozzi and Maurizio Rossi. The inevitable teething troubles manifested themselves before Rossi’s spectacular get-off that finally sidelined the bike. It next appeared in September’s Italian Endurance title round at Misano, when it went much better… until a valve dropped in the Honda engine.

The first VF400-powered prototype designed by Martini with Marconi’s assistance had employed a box-like chassis, made from sheets of alloy-faced honeycomb M-Board by CIBA-Geigy, glued together to form an ultra-strong structure with a high stiffness to weight ratio, like the contemporary Heron-Suzuki 500GP racer employing a similar frame. However, the VFR750R Honda F1 engine was too bulky and, especially, too tall to permit this type of so-called cardboard box design on the Tesi 2, which therefore featured a twin-spar frame in carbon-fibre honeycomb composite. The engine now acted as a semi-stressed member, suspended from the frame, which weighed just 5kg complete, less the swingarms. That’s plural and not singular, because Marconi replaced the front fork on the Tesi series of bikes with an articulated parallelogram centre-hub design, dubbed the DSC or Drive Control System.

While on the Tesi 1 the front Marzocchi suspension unit had been located horizontally behind the front wheel and partly beneath the engine, on subsequent versions this was mounted vertically with a progressive link, similar to that employed at the rear of the bike. Rather than mounting the twin front swingarms in parallel on the same side of the wheel, these were horizontally opposed to each other in order to give the more than 30° steering lock necessary for street use. A pair of tie rods allowed the trail – no less than 120mm to compensate for what Martini perceived as an inherent lack of stability in centre hub designs, coupled with an ultra-steep 20° effective head angle – to be varied almost infinitely, while there were auxiliary brake and steering links.

Continued problems with the Honda race engine rather than the Tesi’s revolutionary chassis reduced the Tesi 2 endurance racer’s public outings to a handful, though it was tested extensively in private throughout 1984/85. At this point, Martini was ready to move to the next stage of development and the Tesi 3, with a tubular steel space frame, appeared at the 1985 Milan Show.

This could be more easily adapted to series production for street use than the expensive carbon-fibre chassis, and testing began the following year, still using the troublesome V4 Honda engine. Martini’s Tesi 3 design established the template for future Tesi models, albeit retaining his favoured hydraulic steering. But Biota’s success in World Superbike racing with the Yamaha-powered YB4EIR slowed the Tesi’s development, and early in 1989 Martini moved to Gilera, leaving Pierluigi Marconi to assume the mantle of Bimota’s chief engineer and he regained control of the Tesi project that he’d been responsible for conceiving in the first place.

Jettisoning the Tesi 3’s boat-derived hydraulic steering in favour of a mechanical system, Marconi had an all-new YB Tesi prototype running inside just two months, now fitted with a Yamaha FZ750 engine, but employing the same essential architecture as the Tesi 3.

This, in turn, led the following year to the Ducati-engined Tesi 1D that, after a season of racing in the Italian Superbike series prototype class, was launched as a series production streetbike at the October 1990 Cologne Show.

Over the next three years, 417 customer examples of the various Ducati-powered Tesi models were built, including 51 fitted with the 400cc air-cooled desmodue motor for sale in Japan. Production of a model that had represented a personal voyage of discovery for Pierluigi Marconi ended in 1995, and inspired a cult of like-minded believers who bitterly regretted the Bimota management’s decision to axe the high-profile, but also high-priced, low-volume model.