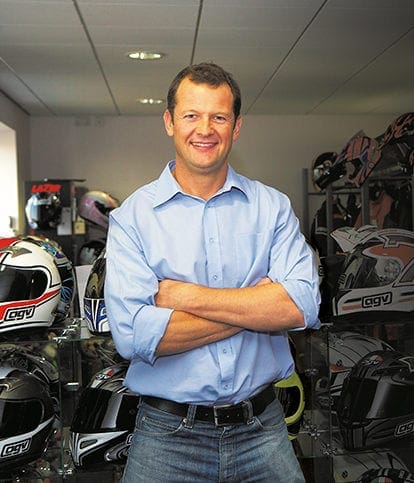 The October Stafford show has a big reputation when it comes to providing special guests and entertainment, but this autumn’s edition is set to beat all records.

As is tradition, the 25th Carole Nash Classic Motorcycle Mechanics Show (to give its full name!) has a guest of honour… but on this occasion the October 13/14 event has three – Terry Rymer, South African Jon Ekerold, Italian racer Pier Paolo Bianchi, plus the rarest collection of race machinery ever seen in one place.

Londoner Rymer burst on to the British national race scene in 1987 when, at just 19 years of age, he beat all of the top UK riders to win the Superstock race at Brands Hatch on a privately entered Yamaha FZ750. And to prove this was no ‘home’ circuit fluke he repeated the feat at the next round at Mallory Park.

By 1988 Terry had turned professional, and in 1989 he won his first world Superbike race. In 1990 he won the British Superbike Championship and international success followed with victory in the 1992 FIM World Endurance Championship, a feat he repeated in 1999. Rymer also competed in WSB rounds from 1988 to 1994, claiming two wins and nine podiums, with a best championship placing of sixth in 1991.

Grand Prix outings also feature in Terry’s long and successful career with a sixth place on a Harris Yamaha in the 1992 British Grand Prix, which was followed by a handful of outings for the official Suzuki factory team in 1996.

However, the highlights of Terry’s career had to be an unmatched record of five race wins in the Bol d’Or 24 hour race and two victories in both the Le Mans 24 Hour race and the Spa 24 Hour Race. He retired from motorcycle racing aged just 32, after winning the World Endurance Championship for the second time in 1999.