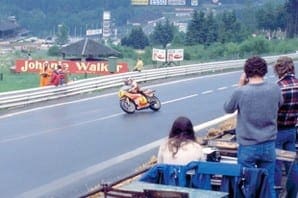 While the large Dutch contingent in the 100,000 crowd went wild as their hero stormed to victory, with a 16 second lead over the American, Hartog’s Suzuki team-mate, Barry Sheene, was less pleased.

Drafted in to the factory Suzuki team to replace Pat Hennen after the American’s Isle of Man TT crash, the intention was for Hartog to help Sheene stave off Kenny Roberts’ run of victories.

The result was down to a shrewd tyre choice by the White Giant, as the tall Dutchman was known, who opted for intermediates, while Roberts and Sheene chose cut slicks. The weather worsened as the race progressed and Hartog’s gamble paid off.

Second place was good enough for Roberts to extend his lead in the world championship, which would be his by the end of his rookie season in Europe.