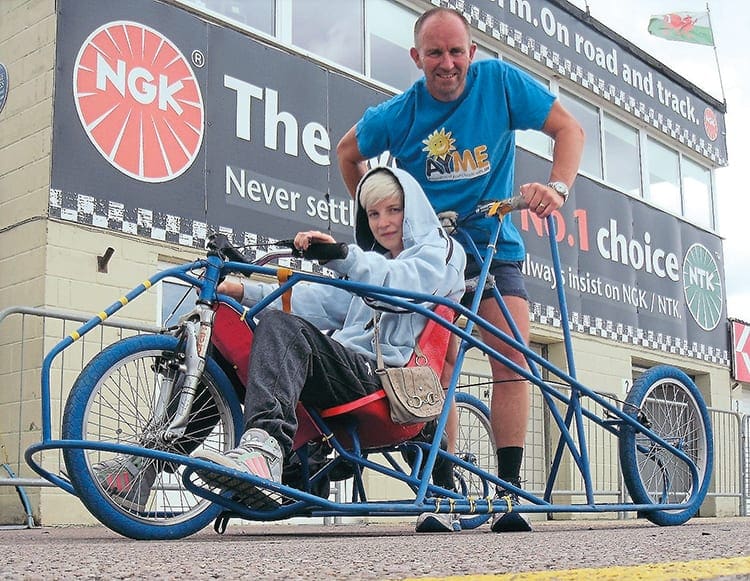 The son of an Isle of Man TT racer is bidding to make his mark on the legendary Mountain course, by pushing a specially-adapted wheelchair.

Graham Inchley, from Andover, intends to cover the equivalent distance of the TT course, 37.73 miles, within eight hours on July 22, to raise money for the Joey Dunlop Foundation.

The Isle of Man Steam Packet Company is supporting his challenge by covering the cost of travel for Graham, his support team and his equipment.

Graham’s planned route will see him depart from the TT Grandstand and head down Bray Hill, before turning off at Quarterbridge towards Castletown. There he will complete a lap of the Billown circuit, where both his father and Joey were race winners. The challenge will then head north to cover several sections of the TT Mountain course, finishing at the Grandstand at around 6pm.

Volunteers will take to the special endurance wheelchair during the journey, with Graham pushing all the way. He already has experience of the challenges ahead as in 2014 he set a world record for pushing an occupied wheelchair, completing a distance of 100.41 miles in 24 hours.

The idea for the Isle of Man marathon came after Graham visited the Island last year to take part in the Classic Racer Lap of Honour during the Festival of Motorcycling. Graham rode the Villiers Starmaker Special that his father Peter had raced to a podium finish in the 1966 TT.

After a remarkable ride, Peter finished behind the works Hondas of Mike Hailwood and Stuart Graham in the 250cc race at an average race speed of more than 91mph. Sadly Graham’s ride on the same bike, 50 years later, wasn’t quite as successful.

“Unfortunately, the ignition packed up between Quarterbridge and Braddan Bridge”, Graham explained. “This was terribly disappointing, but I was made more comfortable by the fantastic people from the Joey Dunlop Foundation whose building is just behind the marshal post.

“They offered me a beer and good company during the last race of the day, which I watched from the balcony. It was soon obvious to me that breaking down here had happened for a reason.”

The Joey Dunlop Foundation, formed in 2001 to honour 26-times TT winner Joey, offers accessible holiday accommodation on the Island, at Braddan Bridge House, to people of all ages with special requirements. Demand for the specialised accommodation has led to additional apartments being built, which have just been completed.

Graham continued: “The facility the Foundation provides is excellent and is a cause which deserves support. The occupied endurance wheelchair push, around the Isle of Man, which will cover the equivalent distance of a full lap of the TT course, should raise awareness of the Foundation and money to support its important work.”

Fundraising is already well under way and you can support Graham by donating at www.justgiving.com/fundraising/Graham-Inchley-Joey-Dunlop-Foundation-Wheelchair-Push

Steam Packet Company chief executive Mark Woodward said: “Graham is taking on a considerable challenge to raise money for the Joey Dunlop Foundation, a cause we have supported for many years, and we are pleased to be able to help by covering travel costs.”