The Isle of Man Post Office has commissioned a set of 12 ground-breaking stamps, featuring TT greats of yesteryear – man and machine alike.

The new Great British Motorcycles set celebrates innovation, incorporating both artwork and classic archive images for the Isle of Man Post Office collection. Harold Daniell, who raced the Manx Norton Single and was a three-time TT winner both before and after World War One, and Freddie Dixon, known as ‘Flying Freddie’ after his victories in the 1920s on both solo machine and sidecar are just two of the riders featured in the iconic collection.

And the ground-breaking engines included in the set include the iconic Norton ‘Manx’ from the early 1960s, the four-cylinder, supercharged, air-cooled V-four AJS and the Excelsior Manxman, a machine at the forefront of road racing in the 1930s. Cool, right? 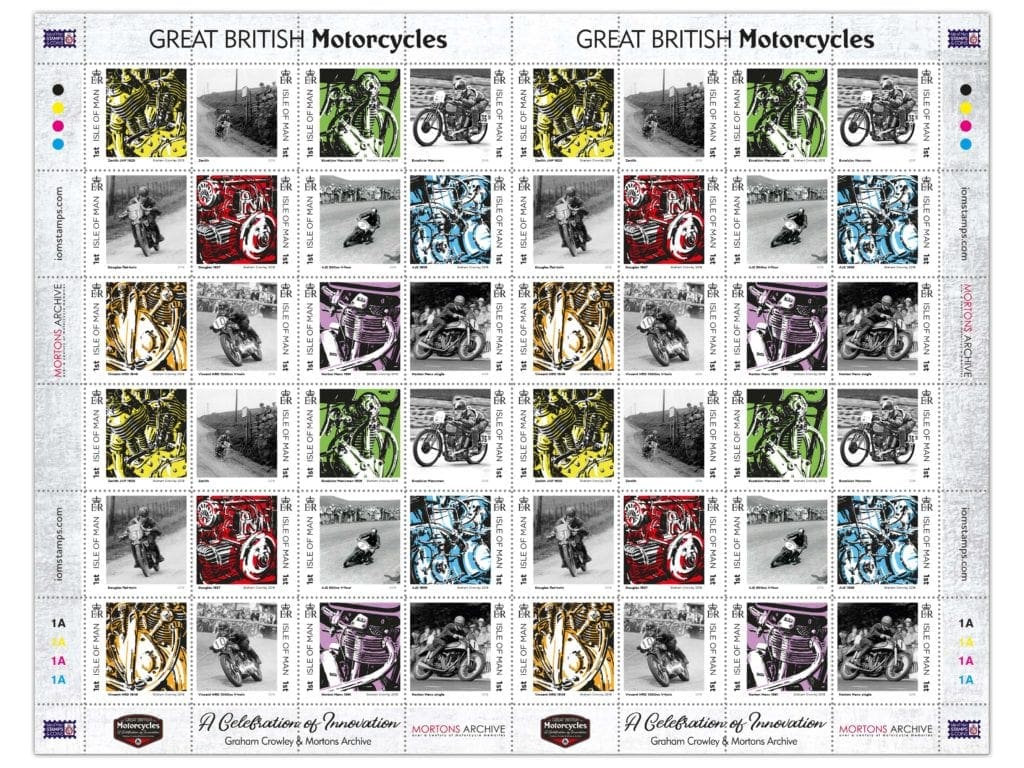 Maxine Cannon, General Manager of Isle of Man Stamps & Coins, said, “This is a celebration of some of the biggest manufacturers, many of whose machines and riders went onto become household names at the Isle of Man TT. That is recognised as the sternest test for machine and rider alike. We expect this to be a popular collection with motorcycling fans of all ages.”

Graham Crowley, previously a Professor of Paintings at the prestigious Royal College of Arts (1998-2006) who is the artist behind the paintings, said: “I’m thrilled to have had the opportunity to work with the Isle of Man Post Office to help celebrate innovation in some truly great British motorcycles. As a fan of road-racing I’ve visited the Island more than 40 times since the late 1960s for the TT, Manx Grand Prix and Southern 100 and so it’s important to be able to bring to life some astonishing skills and talents which went into developing such iconic machines and, ultimately, led to the racing feats of TT heroes.”

Mortons Archive, suppliers of the images used on the stamps, is one of the greatest collections of motorcycle images in the world. Whether it’s a rider from 1937, a showroom photograph of a rare bike model, or just a highly unusual shot of a rider in action – they have it all. The archive offers literally millions of images and documents relating to motorcycles and motorcycling, thousands of which can be viewed and accessed on-line at www.mortonsarchive.com

The stamp collection will be issued on 17th May 2018. For more information, click HERE.