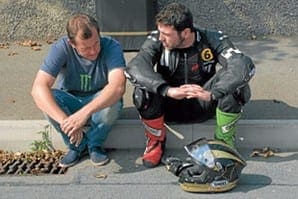 The treasury originally surveyed the Manx Grand Prix in 2009 before replicating the study in the 2013 inaugural Classic TT, Manx Grand Prix, VMCC Festival of Jurby and the Classic and Two Day Trials. The research revealed an overall increase in visitors to 13,407, compared with 8915 in 2009. The study showed these visitors spent a total of £8.4 million compared with £4.9 million in 2009, with 2013 contributing £1 million to the Exchequer.

There was a significant 37% increase in all forms of sea passengers, foot, motorcycle and other vehicles, but the notable increase was in air traffic, which was up 172% to 2346 this year from 860 during the same period in 2009. Figures supplied by Ronaldsway airport show the air traffic growth was particularly significant in the last year, with a reported 11.6% increase, with a total of 33,792 passengers travelling to Ronaldsway between August 17-30, 2013 compared with 30,254 passengers in the same period last year.

Laurence Skelly MHK, the political member responsible for motorsport at the Department of Economic Development commented: “The survey has given the department some excellent data in measuring the work that has been carried out over the last four years to generate more visitors to the August Motorcycling Festival.

“The survey has shown that there has been a significant increase in visitors to the event and the economic contribution that the festival now delivers. I would like to take this opportunity to congratulate and thank all of our event partners, the race officials and marshals as well as other Government departments on what is a major success story.

“We will now look to build on this success to ensure the long-term viability of the festival and to generate the highest possible contribution to the Island’s economy.”

A full copy of the Isle of Man Treasury Festival of Motorcycling 2013 report can be downloaded from www.gov.im

• Classic TT heroes
The inaugural Classic TT threw up many heroes, and not just those winning races on unfamiliar machinery.

Andy Molnar returned to the Isle of Man races in August as a result of the Classic TT, with an ambitious programme, working on a very tight timescale and so very nearly pulled it off.
The way Andy and son Richard worked to get bikes to the start line for his riders was nothing short of heroic. And the way Michael Dunlop conducted himself when he had to pit with a clutch problem instantly endeared him to classic fans.

Team Dunnell, Denise and Tony, were also returnees and they too suffered a torrid time with mechanical issues, later traced to low octane race fuel, and really put in the hours to get Conor Cummins to the line. By the end of the Classic TT, Conor was more like a son than their rider. The team plan to return this year too, with a yet to be confirmed jockey.

Belgian tough guy Bart Crauwels, returning to the Island three years after his huge accident at Union Mills, effectively forfeited his own ride in the Senior Classic, when he donated his spare Paton wiring loom to Roger Winfield.

The Winfield Paton, being ridden by John McGuinness, developed ignition problems and in a real touch of irony Bart’s Paton suffered the same fate… and the only way he could get it to the line would have been to reclaim the parts, something he sportingly declined to do.

In the end it was all for nothing as the Winfield Paton spluttered off the start line and a disappointed McGuinness was forced to retire from the race.

But when it comes to heroes at the Manx Grand Prix-Classic TT in 2013 no one came close to former Manx Grand Prix winner Phil Armes. Phil, who has been confined to a wheelchair since a career ending crash in the Ulster Grand Prix, set off to ride a lap of the Mountain in the MGP Past Winners Parade on an especially adapted bike, using just hand controls.

All was going well until Ramsey, with Phil’s only concern being how he would cope with Governor’s Dip, when he over balanced at Ramsey Hairpin. Despite this mishap Phil was desperate to continue, but common sense saw him taken to hospital for a check-up.