With 50 years racing at the Isle of Man TT under his belt, Roy Hanks has decided it’s time to hang up his leathers for good. During his time at the Isle of Man TT, Roy has been much more than just another competitor, having been actively involved, along with wife Rose, in the TT Supporters’ Club. He is also a past president of the TT Riders’ Association. 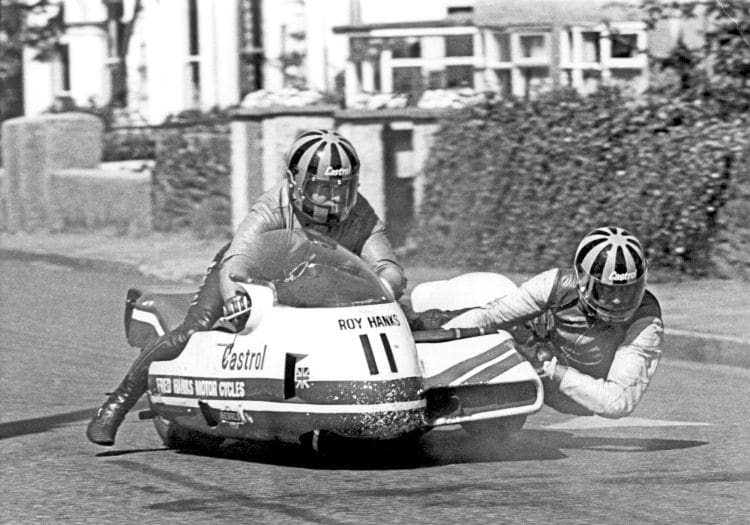 “I’m getting old – crikey I’m nearly 70. My knees hurt, by back hurts, you name it everything hurts. The rush down Bray Hill was all I wanted but then I suppose (in 2011) it changed when I lost Dave Wells,” Roy explained to Classic Racer.

“I’m glad I didn’t pack in then, but it did change a lot, and at the end of last year I started not enjoying it. All I wanted to do was do the meeting and come home. The passengers I’ve had since have all been good.

“The bike’s ready, I’d already entered the TT and the first three meetings of the season, but I have to say I don’t think my heart was in it. I thought ‘Roy, there’s something telling you it’s time’. So I told the missus, Rose, and had a bit of a cry and was in bits really. So I said we’ll give it three days and then told my sister and my brother-in-law, as it’s a big family thing, we all work with the bikes.

“It’s not been forced on me and it has been easier the last two weeks, now I’ve made the decision, but now I need to sell my bike and get it out of the way. The grandkids want me to keep it, but they’re only 13 so that means another three years before they can ride it and I’d be in danger of riding it again myself!

“I’ll be going over to the TT, as all the bookings are done, but it will be a bit different, the first since 1966 not racing” said Roy.

Read more News and Features in the May/June issue of CR – on sale now!