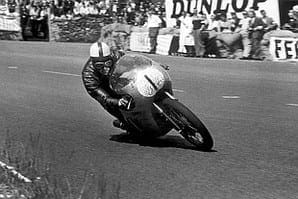 The research has been carried out by the Isle of Man Government Department of Economic Development, to maximise the commercial potential of the Manx Grand Prix Festival and cement its long term future.

A shortened 10-day event, which would climax on the August Bank Holiday weekend, is designed to capitalise on the short-breal motorsports market and minimises competitor commitment and cost and reduces the amount of disruption to residents and local businesses. Research indicated that many visitors only attended for up to seven days, so it was important that attractions were more concentrated for this type of visitor.

The 2013 Festival is proposed to run from the 17th of August to the 26th of August. The ‘centrepiece’ of the festival would continue to focus on competitive racing around the world famous TT Mountain Course including three classic races and a further two races for modern machinery.

The Department hopes to create the most prestigious series of races for classic motorcycles in the world, featuring modern day TT stars along with existing classic racing specialists bringing the most exotic classic racing motorcycles in the world to the Isle of Man. It also means the event would also see a return for the Clubman’s TT titles which would be applied to two races for amateur riders on modern machinery. Designed as a more focused feeding ground for the current TT, the Clubman’s TT classes would incorporate a rider development structure with the opportunity for riders to receive sponsor funded TT scholarships and guaranteed entry into the TT.

The competitive racing programme would be supported by a festival of motorsport nostalgia including parade laps featuring legendary riders and machines from Mountain Course history, off road events including the Manx Classic Weekend Trial and exhibitions of exotic motorcycles and memorabilia. The event would also include the Isle of Man Vintage Motor Cycle Club activities including the popular ‘Festival of Jurby’ event that attracted over 15,000 visitors last year.

Colin Kniveton, Chief Executive, Department of Economic Development, commented: “The proposals are built very much on our consultations and market and media feedback and it is anticipated that a revised format to the festival would give the Isle of Man real potential to increase visitor numbers, media profile and commercial incomes. Implementing these proposals would allow us to tap into the fast-growing nostalgia market that we have seen with events such as the Goodwood Revival and drive a tangible return on the ever increasing investment required to stage the event .”

The 2012 Manx Grand Prix Festival will remain unchanged as published.