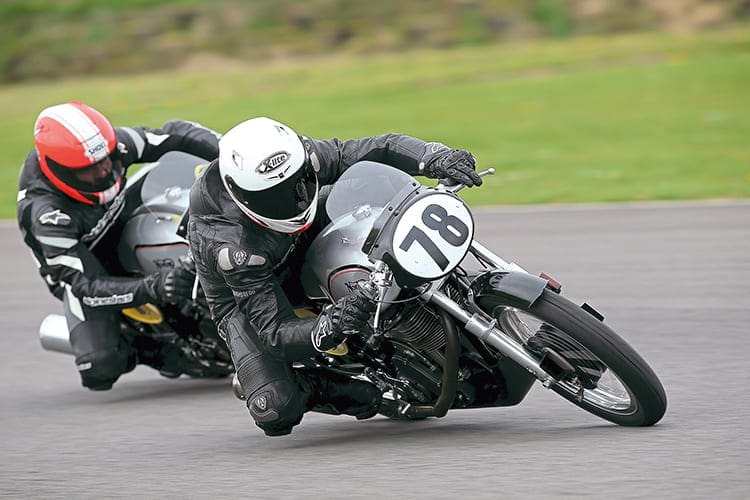 The Lansdowne season kicked off at Pembrey over the Easter weekend as guests of the CRMC, and ran in unseasonably warm and sunny weather.

Thirty riders entered the various classes to kick-start their points tally for the season. Saturday morning qualifying saw the Bonhams class runners at the sharp end, with Dean Stimpson, Izzard Racing Manx, topping the timesheets with a 1:06.383s lap, and Chris Bassett heading up The National Motorcycle Museum-sponsored WRR class.

Race one saw the thundering pack charging down to the tightest hairpin on the calendar, with drum brakes tested to the max at the testing bottleneck. In the Bonhams-sponsored class Stimpson was away with it, taking the win from ACR Manx-mounted Chris Firmin. In the WRR, Bassett took the class win from Ian Bain on his Manx.

In race two Glen English took an early lead on Ed Fenwick’s Manx and kept his nose ahead of Stimpson the whole race, only to be overhauled at the death by 0.4sec. Behind them, the two ACR team-mates Chris Firmin and Sam Clews were beating each other up and were separated by 0.7 sec.

In race three, Glen English was not to be denied the win this time and was followed home by Stimpson and Firmin who were just a whisker apart. In the WRR, Bain took the win from Tony Perkin. In race four it was mayhem on the first lap at the hairpin. Firmin went down and three or four riders tripped over each other avoiding the wreckage, and Firmin. A red flag ensued. On the restart English and Stimpson battled it out with Stimpson taking the win. In the WRR class it was Bassett from Bain from Tony Perkin.

Throughout all four races Alex Sinclair on the Ripley Land long-stroke Manx fought it out with Sam Rhodes on Graham Austen’s Velocette for The Classic MotorCycle-sponsored class honours.

Just three weeks later the Lansdowne circus moved to Donington Park for a new meeting organised by Endurance Legends, with the CRMC running the racing on track.

The Lansdowne had three 10-lap races and it evolved into a great meeting although Saturday dawned a bit wet and miserable but thankfully soon cleared up. Mike Russell put the Richard Adams’ Manx on pole on a wet and slippery track.

Race one saw dry conditions make for a cracking race, with Stimpson holding off Russell by a wheel at the flag with the ACR jockey and current champ Firmin charging through to third from ninth on the grid.

In the Museum-sponsored WRR class, Bain was hounded all race by Bassett with Perkin third. The TCM class had a good mixture of bikes, Rudge, Triumph, Vincent and Velocette. Charlie Williams was out for a ride on a Farrall Rudge but it ended in tears as the crankcase split horizontally, exposing the crankshaft. Rhodes on the Velo took the win from Patrick Walker on his nice and loud Vincent twin.

Race two was on a sunny Sunday morning and Glen English lit the Manx touch paper and fired into an early lead with Stimpson and Russell both in close attendance. Stimpson was first across the line with a lap record. Bain again took the WRR win and Sam ‘Rodeo’ Rhodes charged to another TCM win.

With the sun belting down, race three saw English grab the lead from the start, with Russell and Stimpson mixing it at the front. Eventually Stimpson forced his way to the front with Russell pushing his Avon Tyres to the limit to keep tag, and all the time Firmin was scything his way through the field eventually pushing English to fourth.

In the WRR class, Ian Bain took the win from Chris ‘The Hound’ Bassett and George Thomas on an immaculate Dunnell Manx. The Rhodes Velo limped home to take the TCM class win with a rattling big-end.