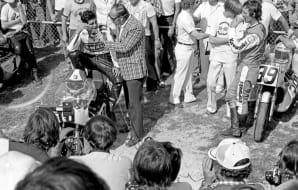 Hurley Wilvert was a mechanic and amateur racer who earned his shot at the big time in the early 1970s. By 1974, he was on the podium of the Daytona 200 with Giacomo Agostini and Kenny Roberts. Norm DeWitt tells his fascinating story.

Hurley Wilvert: From mechanic to the world stage
Hurley Wilvert in the winners’ enclosure after finishing third in the 1974 Daytona 200 looks on as paddock announcer, Roxy Rockwood, interviews an exhausted winner, Giacomo Agostini.
Hurley Wilvert was born in Pennsylvania, one of many in the immediate post Second World War generation who was constantly being relocated, his father being in the Army.

Hurley takes up the story, “I was born in Sunbury, but didn’t live there long, maybe until I was five; my Dad was gone most of the time.

“After the war he was an officer in the Army Corps of Engineers.”