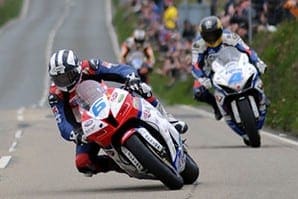 The Honda rider was trailing long-time race leader Gary Johnson going into the final lap but with a stunning new lap record of 131.220mph, he was able to take his sixth TT win by 18.4s.

Johnson had to ease his pace slightly on the final 3 lap when his Kawasaki suffered an oil leak but after two retirements from the two races held so far, he held on for a good second with John McGuinness completing the podium places in third.

It was the Kawasakis of Johnson and James Hillier that led in the early stages, the former holding a one second advantage over the latter at Glen Helen on the first lap with McGuinness a further second back in third. Dunlop was a further 0.75s adrift in fourth but by the end of the lap he’d worked his way up to second.

Johnson’s opening lap of 129.215mph gave him a 4.8s lead though and it was Guy Martin who was up into third, McGuinness down to fourth with Dean Harrison riding superbly in fifth. Hillier had slipped back to sixth with Bruce Anstey, Michael Rutter, Steve Mercer and William Dunlop completing the top ten. Local man Conor Cummins was an early retirement whilst Josh Brookes also pulled into the pits to make adjustments to his chain.

Lap two and Johnson continued to lead but the gap was slowly shrinking and when they came into the pits for their fuel stop, the difference was just 1.5s, both riders lapping in excess of 129mph. Martin did the same as he held onto third from McGuinness, Harrison and Hillier but the Tyco Suzuki rider was hit by a 30s speeding penalty as he left pit lane dropping him down the order.

Johnson wasn’t going to just hand the place to Dunlop, the man of the week so far, and he showed his Mountain Course prowess on the third lap when he doubled his lead to three seconds as they headed into the final lap. Martin’s challenge, which had been effectively ended by the penalty, came to a halt for good at Glen Duff on the third lap and so McGuinness was secure in third with Harrison likewise in fourth, the youngster on course for his best ever TT result.

As the fourth lap unfolded, Dunlop hit the front for the first time, his margin of lead at Glen Helen just 0.137s but, with his foot having slipped off the pegs at Union Mills, Johnson’s charge for victory was all but over. Indeed, when the riders swept round Ramsey Hairpin for the final time, Dunlop’s lead was almost three seconds and this became seven through the Bungalow.

Dunlop was setting a scorching pace and as he took the chequered flag, his final lap was confirmed at 131.220mph, comfortably inside the previous lap record of 130.741mph set by Ian Hutchinson in 2010 and just three and a half seconds outside McGuinness’ outright lap record set on Saturday. His final winning margin was 16.4s with Johnson still delighted with second having pushed Dunlop for as long as he could.

McGuinness took a strong third, his 38th TT podium in total, with Harrison claiming an excellent fourth whilst Anstey edged out Hillier for fifth, the Kawasaki rider slipping back on the final lap as he began to lose power.

The results mean Dunlop comfortably leads the Joey Dunlop Championship on 75 points followed by McGuinness (45) and Anstey (39). Mercer is the pace setter in the TT Privateer’s Championship with the maximum 50 points from his two races with Dan Kneen (44) in second and Dan Cooper (39) in third.

• Earlier in the morning Michael Dunlop the opening Monster Energy Supersport race, the day after his stunning race win in the Dainese Superbike Race. Riding the MD Racing Honda, Dunlop took the lead at Ballaugh on the opening lap from brother William and with a 127.525mph lap on his second lap, he caught Bruce Anstey on the road and eventually took the win from the Kiwi by 10.3s.