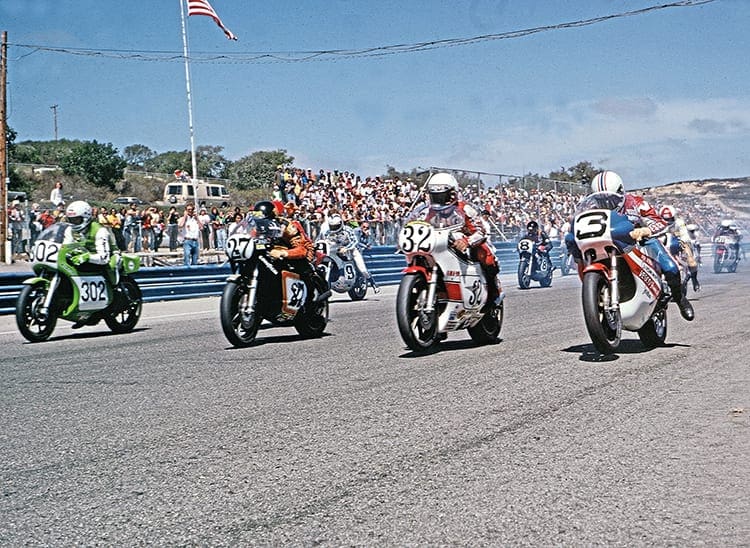 In the previous issue we told you the story of how the 750 class began and evolved into a class that drew big names, big races and big outcomes. Here’s the continuing story of the 3/4litre class and how the 750s got its first world champion.

The rules come under scrutiny once again at the FIM’s annual conference with the 750s deemed too powerful for both the riders and the accessories, primarily the tyres. Various ideas were floated around but in the end no changes were made, with the exception that the Formula 750 was upgraded, gaining full World Championship status from the 1977 season onwards.

The season again got underway at Daytona, where the durability of the tyres and the weather were of major concern to everyone. A decision was made to run the event as two 100-mile heats and the three clear favourites were all Yamaha mounted – Steve Baker, Johnny Cecotto and Kenny Roberts.

The first 100-mile heat saw Cecotto drop out with an oil leak after just four laps and it was Baker who romped to victory some 28sec clear of Roberts, with Takazumi Katayama giving Yamaha a clean sweep of the top three. The expected bad weather then appeared and the second heat was cancelled.

Yamahas dominated the field at Imola, with 36 of the 39 entries on the TZ750, the remaining three on Kawasakis and Roberts was the star performer, winning both heats ahead of Baker, Agostini and the young Frenchman Christian Sarron. Baker then claimed his second win of the season at Jarama, with Sarron again impressing in second place and the American was making a real charge for the title. He had to settle for third place at Dijon-Prenois though, as Estrosi grabbed the victory once more.

Round five saw the riders head to Brands Hatch in July, where Baker dominated the event, joined on the podium by British riders Ron Haslam and Newbold, and round six saw a similar outcome at the fast Salzburgring, visited by the 750cc calendar for the first time. Baker got his fourth win, this time from Agostini and Sarron.

Zolder in Belgium was the next venue and Baker again dominated proceedings ahead of Marco Lucchinelli and Sarron and a week later at Assen, rising star Lucchinelli clinched his first 750cc victory ahead of Baker, Sarron and Agostini.

A second United States round was run in California, at Laguna Seca, but few European riders attended the event, and only one, Sarron (eighth), scored any points. The victory went to Skip Aksland in front of Baker and Gregg Hansford on a rapid Kawasaki and the Australian went on to take victory a week later at Mosport in Canada, with the similarly-mounted Yvon Duhamel in second.

Baker continued to rack up the points in third place and his dominance of the season could be seen in the final points standings, as he ended some 76 points clear of Sarron, the runner-up. Agostini won the final round at Hockenheim and the 15 points saw him clinch third place overall.

A lot of top riders had competed in the first 750cc World Championship, but many of them only competed in selected rounds and at the next FIM Congress a discussion took place as to whether or not to include the 750cc races at the Grand Prix events. Opinions were very much divided among the members, with concerns about the calendar and the number of events, resulting in time-consuming and expensive travel for the riders.

At the next Spring Meeting in Geneva, in March 1978, opinions were still divided, with some delegates in favour of stopping the 750cc Championship, arguing it was a failure, while others defended it, claiming that it deserved another chance. Some also argued that the creation of the F-750 Series was premature, while others said that it was the FIM’s best initiative in recent years.

1978 – Cecotto and Roberts do battle on Yamahas

Roberts arrived in Europe full-time in 1978 and while the 500cc World Championship was his priority, he was determined to have a good go at the 750cc and 250cc titles as well. With fellow Yamaha rider Cecotto sacrificing the 350cc class for the 500cc and 750cc Championships, the scene was set.

The relationship between the FIM and Daytona management had broken down and so it was Imola that hosted the first round of the season, with Cecotto taking the win from Baker, Sarron and Hansford and the Venezuelan made it two from two with victory at Paul Ricard as well. Roberts got his first points on the board in second place, with Baker in third.

Roberts stopped Cecotto’s winning run at Brands Hatch but a second place for the latter, this time ahead of Pons, extended his title lead. Kenny was making a charge though and he was victorious at both Österreichring and Jarama and although Cecotto was second at each race, his lead was cut down to nine points.

Gianfranco Bonera and Sarron took third in Austria and Spain respectively, but Baker’s title defence was evaporating rapidly. Despite winning the title the year before, he had lost full factory support from Yamaha.

Cecotto’s first DNF of the season came next time out at a wet Hockenheim when a sticking throttle forced him out early on and Sarron took his first win of the season from an impressive Bonera, Hansford and Roberts, who closed to within one point of Cecotto.

However, the American’s challenge faltered at Zolder when he retired on the first lap with a broken chain tensioner and Cecotto took full advantage, claiming maximum points ahead of Frenchman Herve Moineau and Bonera, his lead now back up to 16 points.

This lead increased to 26 after the Dutch round at Assen when Roberts again failed to score, this time due to a broken steering damper with third place for Cecotto, behind Bonera and Katayama, putting him firmly in the driving seat.

The last two events were held in the US and Canada respectively and at Laguna Seca, Roberts won, ahead of Baker and Mike Baldwin, to show it wasn’t over just yet and with Cecotto’s gear lever snapping, he managed to bring the gap back down to 11 points.

Baldwin demonstrated his potential at Mosport with a win ahead of Roberts and Duhamel but sixth place was enough for Cecotto to become world champion, five points ahead of Roberts. It had been an excellent year for the 750cc World Championship with full grids, top class riders and close racing throughout the season.