Last year Team UK trounced the Aussies. This year the margin was just 11 points after the Aussies staged a remarkable comeback in the last of the four races.

The victory was made even sweeter for Team UK when their star rider, Jeremy McWilliams, set a new lap record for the International Challenge. 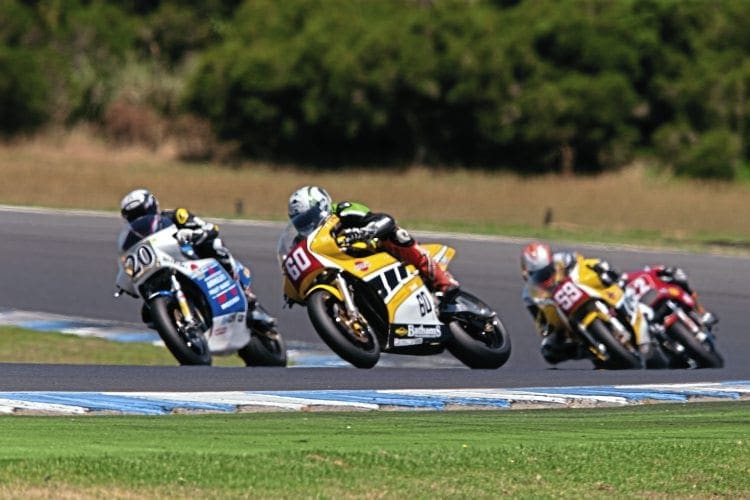 Maybe in the end it didn’t matter who won. The racing was some of the best ever seen in the history of this popular showdown, which is the biggest classic racing event in the Southern Hemisphere. Crowd numbers were up, the weather was perfect and the grid was packed with some of the biggest names in racing, as teams were free to enlist riders from any country.

Australia went into the last of the four legs quietly confident but still needing to dig deep.

The points standings were UK 516 and Australia 490. The Aussies very nearly pulled it off, as the UK faltered under pressure.

Alex Phillis won, denying McWilliams four wins in a row, while Team UK’s new hotshot rider, Peter Hickman, crashed out at MG after briefly taking the lead on the run out of Siberia.

Phillis and Hickman were the sensations of the meeting. Both were racing their
XR69-based racers for the first time and Hickman had never seen the track before.

Phillis qualified an amazing second and steadily built speed over the weekend to achieve his maiden win in any form of motorcycle racing at Phillip Island.

After failing to catch him in Race Four, McWilliams was generous in his praise of
the 22-year-old.

“No one is faster than him through Turn 2, Siberia or Turn 11,” he said later. “I maybe could have got him at Turn 12 (on to the main straight) but I wasn’t close enough.”

There was much love for Phillis Junior. “This is the best Island Classic I’ve ever been to,” said proud father Robbie who, along with Stu Winton (ex-Josh Brookes crew chief) and Lyell Williamson (a life-long ex-racer friend of Robbie), guided Alex through the weekend.

Read more in the March/April issue of CR – out now!