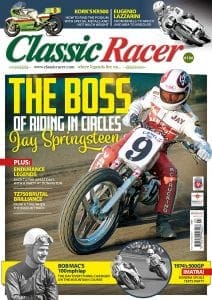 One from our archive which not only shows a great rider doing what made them great but also the folly of a watching crowd who choose the wrong direction in which to spectate.

Malcolm’s been out and about in various corners of various paddocks gathering the where, the what and the why over the past few weeks.

Or, more accurately, your thoughts and missives on the biggest topics of the past month in the classic racing world.

The first in an extensive series of line drawings featuring the most iconic racing motorcycles ever made. And to kick things off, we have a specific Honda that was once sat under Freddie Spencer.

The story of a man who defined a generation and took what he had on hard-pack dirt and managed to find form on Tarmac, too. For a career that spans four decades, it’s quite a tale to tell. Told here.

How exotic materials and sheer bloody-mindedness took a bike and turned it into something (comparatively) unique.

How a small Italian man made his way in the crazy and competitive world of small capacity Grand Prix racing. Tough as a boiled boot, these lads.

Combine Bob Mac with a bespoke, somewhat single-minded plan to make a fast Norton and you’ve got a brilliant story from a time when the bravest souls made thr biggest gains.

Tepi was on home soil and still in with a shot at the 500cc title. All he had to do was beat Phil Read (and not crash in the 350cc race).

Today we do the tonne. It’s that moment where the first, some would say most significant, major milestone of the Isle of Man was delivered. From behind a dustbin fairing.

Going fast, sideways on dirt was long the preserve of the likes of Springsteen and for a while K Roberts esq. Terry Stevenson taks a look at the motorcycles that made men of men.

Donington played host to the Enduranc Legends, ICGP and Lansdowne races and BHR made its way out twice whilst Mallory and Pembrey saw CRMC action. It’s been a very busy few weeks for the racers this racing issue.