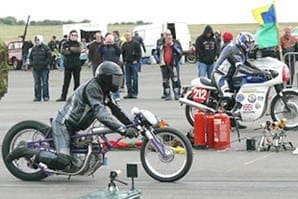 The entertainment began with the Ducati singles and Formula Bantams sharing the track, Rich Hawkins taking his first of many wins over the weekend on a 349 Mk 3 Ducati. Nick Bramley took the first Bantam race honours with Michael Brown, Ian Scutt and Mike Powell pecking at his heels all the way to the flag. These four had some great dices over the weekend, each grabbing a win.

Some very funky paintjobs were being shown off on the packed scooter grids, Damon Tunnicliffe’s mean looking fully faired Lambretta taking him to the front in most of Saturday’s outings. More beautifully turned out bikes graced the ‘big bike’ startline, the Rob North Rocket 3s of the Woolleys putting in good performances, but the fight for top spot all day was between the Seeley G50 mounted Ian Sheltner and Mike Bevan on a 750 Seeley Norton. Rich Hawkins rode the wheels off his Ducati again to take the 250/350 races and the world’s oldest rider/bike combination of Mervyn Stratford and his bionic Rudge bossed virtually everyone else about.

The pre ’72 unlimited three wheelers showed everyone how to have a good time throughout the weekend. The Quirk’s Vincent powered outfit just seemed to have the legs in the early stages, but the Tuer’s very rapid Morgan and Eddy Wright’s 750 Bella BMW soon made sure the spectators were on their toes.

Misfortune dogged many of the BEARS riders on Saturday, not least novice Robin Webster who threw his Laverda 500 away in the first race whilst leading, causing the red flag to come out. With a depleted field on Sunday, Nigel Clark took charge with some strong showings on his 950 V7 Guzzi. Rich Hawkins had it all his own way again in the Ducati class, with Andy Hunt looking the strongest of the 250 competitors over the weekend. The four key Bantam jockeys fought hard again with Mike Powell hopping onto a Seeley G50 between the Bantam races to contest the 351-500 specials championship. Some cracking racing saw Powell and Ian Sheltner share victories, with Dave Matravers, also Seeley G50 mounted, join them up front and grab a win for himself in race 4.

Tony Perkins rode his 500 Rudge with style and class keeping Stratford in his sights, and showed many of the newer and larger capacity BEARS the way home in the mixed BEARS/pre 48 races. Saturday’s sidecar madness continued on Sunday with the Quirks, Tuers and the Wright/Clarke combo knocking lumps out of each other. Sheltner, Bevan and Tim Woolley fought it out in the ‘big bike’ class.

The 750 Crick BSA outfit of Phil Holt/Jeff Gamble swept the pre’72 750 sidecar races, with the 1300 Vincent outfit of Bishop/Howes proving to be the frontrunner in the unlimited to ’58 three wheeler class. Two BMW ‘Flying Brick’ big wheeled outfits joined the sidecar party, and what a curious sight they were. Mr Lorriman’s machine sported the number ‘13’, but the pilots, outfits and passengers stayed in one piece and enjoyed the action.

The unlimited capacity sidecar races must mean there are some hard fought battles ahead. The Tuer’s Morgan turned into a ride on mower more than once over the weekend in a bid to make up a place, the Quirk’s Vincent pulling off the same trick and demolishing a corner sign.

Ian Sheltner proved to be a hot contender in more than one of the solo classes, but by the final races on Sunday a lot of riders were really finding their feet again after the winter layoff, promising a great season ahead.

The next event will be at Three Sisters, Lancs May 10-11