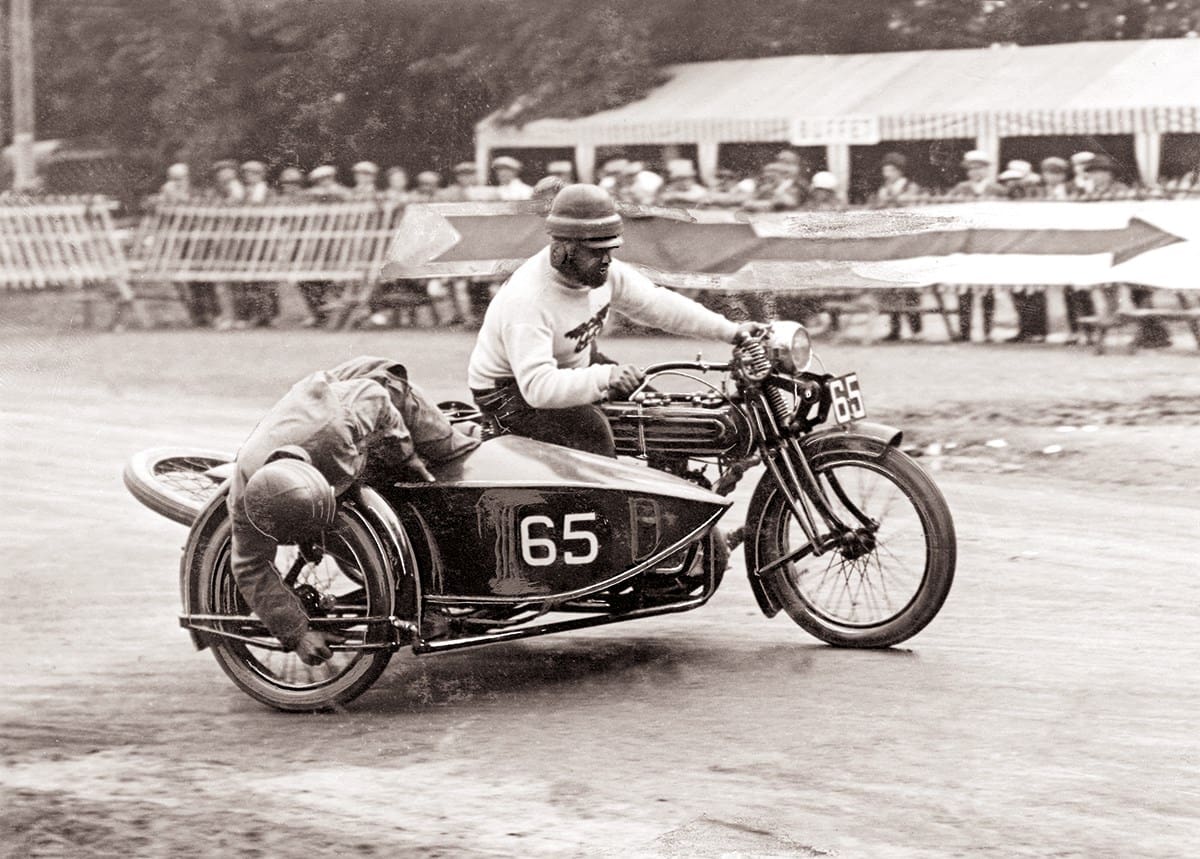 France’s Bol d’Or 24-hour race celebrates its centenary this year. Here, we have a brilliant action photograph from the 1924 edition, where solos and sidecars ran together.

This rather remarkable action picture is taken from the June 19, 1924 edition of The Motor Cycle, the original caption reading thus: “One of the Rene Gillet drivers, whose passenger had a strenuous 24 hours.”

Yes, 24 hours – as the event in which the combination was taking part in was the Bol d’Or 24-hour race, held at Whitsuntide, on a road circuit (‘Circuit des Loges’) in the forest of St Germain, near Paris. The rider is Henriet, passenger unknown, though they finished third in their class, for 1000cc sidecars.

Both Motor Cycling and The Motor Cycle carried coverage of the event – with each leading their reports on the news that, in a sea of French, Belgian and Swiss motorcycles, it was a British-made Sunbeam, an early 493cc overhead valve parallel model ridden by 28-year-old Parisian marque agent Rene Francisquet, which ran out overall victor, despite the fact that of the 49 entries, just three were British-made – Bartlett on an AJS, who retired, and Minot’s Triumph, third in the 600cc sidecar class.

The Bol d’Or had started in 1922 at a circuit called ‘de Vajours,’ its home forone year, before three years at Circuit des Loges. There was a one season hiatus in 1927, with a different track used, before a return in 1928, until 1936. After that, it moved to Montlhery, using part of the speed bowl.

The winner of the first two events had been Tony Zind, from Lyon, on a Motosacoche, but he couldn’t challenge in 1924, finishing well down the order, Francisquet enjoying (if that’s the right word!) his victory, by covering 951¾ miles in the period, completing 265 laps of the circuit. Second place went to Belgian Achille Hufkens, five laps shy of Francisquet, but well clear of his compatriot and fellow 350cc two-stroke Gillet rider Joseph Reinhartz, both clear of fourth finisher, Oswald Lambert, on a 500cc Gillet. Fifth was first sidecar, Swiss Ed Gex, with Mademoiselle Gex in the chair of the 1000cc Motosacoche, ahead of Lucien Lemasson on his remarkable 175cc French-made Thomann.

Our man Henriet managed 207 laps of the 3.59 miles circuit, compared to Gex’s 243 and Labourdette, the lead Rene Gillet V-twin, who covered 225. Fourth and fifth in class were two more Rene Gillets, piloted by Richard and Lecombe. Made initially in central Paris from around 1898, Rene Gillets were offered commercially from circa 1902, then from 1904, V-twins became the company mainstay. Commercial success led to a move to bigger premises in Montrouge, south of the city centre, while the big V-twins being made there found favour for their robust construction, being used extensively by the police and Army.

While updated versions of the big V-twins were produced post Second World War, later production focussed on small (up to 250cc) two-strokes, before the business closed in 1957. Incidentally, the factory is not to be confused with Gillet, which was a Belgian concern.

Rene Francisquet was to win again in 1925, again on a Sunbeam, before the Wolverhampton maker completed its hat-trick, with Damitao taking top honours in 1926. It wasn’t until 1931 there was another British maker (Velocette) to win, while Harley-Davidson claimed its only victory in 1938. Two rider teams were instigated in 1954, three rider teams in 1982.

The event wasn’t held in 2020, owing to Covid-19, but returned in 2021, with this year’s – the 100th anniversary – taking place over September 16-18. Riders will complete in teams of three and won’t be expected to eat and drink on the move, like Tony Zind did.