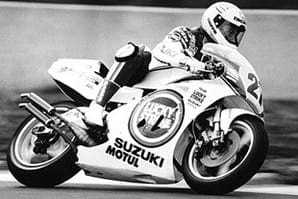 Radiguès will ride the Kevin Schwantz 1994 RGV500, which the Texan rode to fourth in the 500cc World Championship, winning two Grands Prix that season. The Factory XR94 is part of Steve Wheatman’s Suzuki Classic Racing Team collection. The British businessman is a longtime supporter of the Bikers’ Classics event.

As part of the celebration of 40 years of the RG500, Steve Wheatman has offered the ex-Schwantz machine to Didier de Radiguès, Belgian’s most successful road racer. De Radiguès spent six years in the 500cc class on various brands.

After two years racing in the 250 class De Radiguès returned to the 500 class in 1991 after signing a deal with the Lucky Strike Suzuki team as team-mate to Schwantz. Didier finished eighth in the championship that year – fifth place at the Dutch TT in Assen was his best result.

De Radiguès has a special relationship with the Spa-Francorchamps track. Besides winning the Spa 24 Hours on four wheels, he also enjoyed some great successes on the undulating circuit in the Ardennes. In 1983 he won his home race on a 250cc Chevallier, beating Christian Sarron. It was to be the last time a Belgium rider won a Grand Prix. That season de Radiguès took third in the final standings, having finished runner-up in the 350cc class in the previous year. In 1990 Didier once more came close to winning the Grand Prix at Spa-Francorchamps, finishing second in the 250 class.

The Bikers’ Classics weekend also features the 4 Hours of Spa and rounds of both the ICGP Championship and IHRO series. For more information go to www.bikersclassics.be