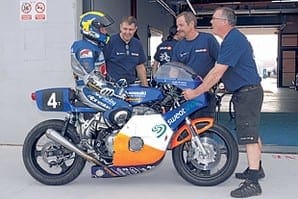 The P&M which the Phase One guys race is the ‘factory’ bike which John Cowie and Bernie Tolman used in the 1978 World Endurance races, scoring an eight hours win at Brands and rostrums at Spa and the Bol d’Or. John Cowie also won the British Championship on the bike and was the machine used by Cowie in the famous dice with Read and Hailwood at the Race of the Year in 1978.

The series, in its inaugural year, is accredited by the FIM and is set to become Europe’s premier classic championship, based on the 4 Hours of Spa format. In 2014 five rounds are planned, starting in April with Le Castellet, followed by rounds at Imola, Nurburgring, Spa and Aragon.

In addition to the FIM series win, the Sweatshop Phase One team claimed non-series event victories, with wins in the Mettet 4 Hours (run as two, two hour legs) when Stephane Mertens and Peter Linden as riders in a rerun of the 2000 WEC winning team, and at Oschersleben with a four hours night race as part of the German Speedweek.

Competition in the series has been hot between the experienced WEC teams of Sweatshop Phase One and Alf’s Endurance, with the teams starting the final round tied on points. Other round winners this year have been Kaiser Classic on a Moto-Martin (D) at Spa and the long established French MotoBel (F) team
at Imola.

The series is for unlimited capacity machines up to 1982, with restrictions on tyres, which must be treaded, and brakes can only be two pot and non-floating. Fork diameter, wheel diameter and fuelling are also regulated.