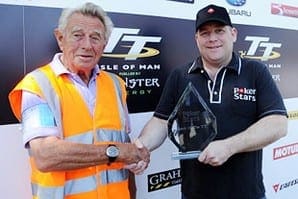 Douglas, Isle of Man. The longest serving TT marshal collected the 2013 PokerStars 'Spirit of TT' Award on behalf of the Isle of Man TT Marshals Association ahead of last Friday's PokerStars Senior TT.

Eric Alexander from The Isle of Man, who will celebrate his 80th birthday next month, first marshalled in 1952 at the age of 19. He was a former Chief Sector Marshal and Deputy Sector Marshal on Sector three, between Greeba Castle and Ballig Bridge.

Eric had to interrupt his stint on duty at Gorseleigh on Friday to collect the award as the presentation was made at the TT Grandstand.

Commenting on the award Gary Thompson, MBE, BEM, Clerk of the Course said: "The award is a tribute not only to Eric but to all the Marshals for the work they do to make the event possible. This year they have been faced with all kinds of conditions but have been in place ahead of every qualifying session and race and ensured that the schedule can run to plan. The whole operation has run extremely well and that is a tribute to everyone who has signed up for the Orange Army."

The award is given to the person or team who best represent the ethos and values of the TT Races. Previous winners of the award have included Paul Owen in 2010, Conor Cummins in 2011 and sidecar duo Ben and Tom Birchall who won the award in 2012.