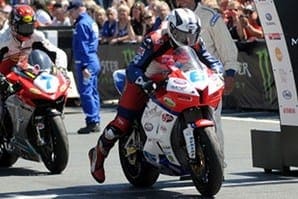 A stunning final lap of 128.667mph gave the 24-year old a 2.3s victory over long time race leader Bruce Anstey to make it four wins from four races with the second HM Plant Padgetts Honda of John McGuinness in third.

After a 15-minute delay due to a power failure in parc ferme, Anstey who, as he promised, was quickest out the traps but, as expected, it was close with Dunlop just 0.4s behind. Brother William was right in contention in third with the fast starting James Hillier again showing well on the run to Glen Helen. He occupied fourth with McGuinness and Dean Harrison close behind.

As the lap progressed, Anstey continued to extend his advantage and an opening lap of 126.476mph gave him a 3.5s lead over Michael Dunlop with William almost three seconds further back in third. McGuinness was up to fourth now ahead of Guy Martin and Harrison.

The duo at the head of the field practically matched each other all the way round the second 37¾ mile lap but Anstey continued to lead, his lap of 127.817mph just a fraction outside Dunlop’s lap record from 2010. The gap had crept up to 4.47s with the Dunlops in second and third, McGuinness in fourth, Cameron Donald in fifth and Hillier still in sixth. However, the HM Plant/Padgetts crew got Anstey out from the pit stop in super quick time, his lead shooting up to nine seconds.

Dunlop knew he had work to do in the second half of the race and he made his charge immediately, reducing the deficit to 5.6s at Glen Helen. Just as the gap between the top two was decreasing, so was the gap between William Dunlop and McGuinness for third with just 2.4s between them with less than two laps to go. Donald was still in fifth with Hillier in sixth as, once again, the fans were treated to the leading five riders on the road circulating nose to tail.

Going into the final lap, Anstey still held sway by just over four seconds and he led on the road too but with Dunlop now having clear track, having passed McGuinness, Hillier and Donald, he ate into the gap at all of the timing points.

He hit the front for the first time at Ballaugh, his lead now 1.5s but he had to work all the way to the chequered flag and it needed that sensational new lap record to see off the strong challenge of Anstey, the difference at the end of 150 miles of racing just 2.3s. Dunlop’s race record was also a staggering 28s inside the previous best. 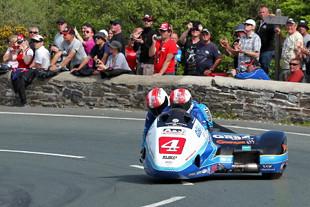 • Win for Birchall brothers Sure Sidecar 2
Having been forced to retire from Saturday’s three-lap encounter when leading, the Nottinghamshire brothers Ben and Tom Birchall made no mistakes this time, leading from start to finish to take their first victory around the Mountain Course and winning by a 17.3s margin from Dave Molyneux/Patrick Farrance with Conrad Harrison/Mike Aylott having to settle for third on this occasion.

The Birchalls signalled their intentions from the start moving into a two-second lead at Glen Helen on the opening lap, with first race winners Tim Reeves/Dan Sayle slotting into second and Harrison a further one and half seconds back in third. Molyneux lay in fourth from John Holden/Andy Winkle and Gary Bryan/Jamie Winn.

There was no change at the top of the order over the remainder of the lap and a lap of 114.490mph gave the Birchalls a 10.7s lead over Reeves/Sayle with Molyneux/Farrance now moving up to third. Harrison/Aylott slipped back to fourth with Holden/Winkle and Bryan/Winn still in fifth and sixth.

Circulating ahead of Reeves/Sayle on the roads, the Birchalls extended their lead to 11.5s at Glen Helen on the second lap and that soon increased when the first race winners were forced to retire at Ballaugh. That promoted Molyneux/Farrance and Harrison/Aylott up into the podium places with Holden up to fourth and Dougie Wright/Martin Hull now getting the better of Bryan/Winn for fifth.

The Birchalls second lap was their personal best at 114.662 and although Molyneux/Farrance also lapped in excess of 114mph, they were now 16s behind. However, they were a similar distance clear of Harrison/Aylott with the top six remaining the same.

On the final lap, the Birchalls were able to maintain their advantage over Molyneux/Farrance and they took a superb victory thus following in the footsteps of Reeves in adding a TT victory to their World Championship success of 2009.

• If you're on the Island today, don't forget the Josh Brookes book signing at WHSmith, Douglas at 2pm. Details below.