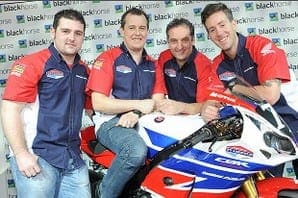 The three-man superbike squad, equipped with the Honda CBR1000R, will also contest the North West 200.

The new-look team was unveiled at Motorcycle Live in the UK as McGuinness, Rutter and Dunlop took to the main stage for a Q&A with TT commentator James Whitham.

Simon Andrews joined the trio on stage but Cameron Donald was unable to attend. The updated livery for the Honda TT Legends machine was also revealed – a tri-colour design that replicates that of the 2013 production Fireblade.

Team manager Neil Tuxworth said: “We’re very pleased to have a really strong team both for world endurance and the road races this year. The team that we’ve put together for both disciplines means we are in a much stronger position than last year.

Team manager Neil Tuxworth said: “Looking at the road racing, we’ve haven’t run a three-man squad for a number of years now. It’s quite significant that not only are we running three riders but we are also bringing Michael Dunlop in as one of those three.

“He’s a young rider who already has three TT wins under his belt and we feel that he is the future of road racing. With Dunlop, McGuinness and Rutter – who of course have both been very successful on the roads – we have a very strong line-up for 2013.”

McGuinness said: “I’m really pleased to be involved with the team again. For EWC, I know the tracks, I know the bike and we’re ready to start upping our game even more.

“We’ve done well during the development stage over the last couple of years but this is the year for us to fight for the podium and challenge for the championship.

“As for the roads, it’s second nature for me now. I love working with the same crew that I’ve been with for so many years. The whole package just works and I don’t want to change that. I’m ready to get stuck in and hopefully get some more wins.”

Rutter said he was excited to be riding with the Honda TT Legends next year.

“Endurance is not something I have done before so that’s going to be a great experience and I’m looking forward to seeing what we can do there,” he said. “I’ve obviously got a history with the Louth-based team as I did BSB and the roads with them for a couple of years in 2004/05, so I’m familiar with the Fireblade and I know the crew well. It will be good to be back with the team and I’m really happy back with Honda.”

Dunlop said: “This is a big opportunity for me with both Honda and Dunlop and it’s an honour to be riding for them so I’m looking forward to getting started.

“People are asking me how it will be for me having John as a team-mate but when we get on the bike it will be the same. I get on well with John but I don’t worry about anybody else when I’m on track. As a team we’ve got a great line-up with Rutter as well so it’ll be a pretty good show.”