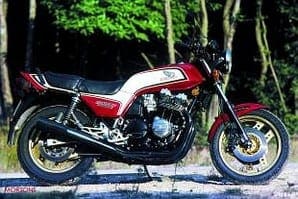 But even on the reps that fall into the good or less category it’s relatively easy to make them sound a little like the original thing, with four open meggas, but it’s quite another to make them feel like a real race bike. Ronald Agoston has achieved just that, and the tweaks added by Mick Grant have created a bike that feels the real deal.

My all too brief test ride came at Jurby during TT week 07. My first challenge was to get to the bike through the crowd of admirers, amongst them the TT’s fastest man John McGuinness.

Rolling out of the paddock and onto the runway the Honda felt like a racer, not a converted road bike. The geometry is set exactly as the original RC181 and cants the rider forward in a bum in the air, weight on the bars position. The sound from the four open megaphones is magical, but even with the Grant tune on the carbs it is necessary to remember this is a racer and keep the motor spinning.

The red line on the tacho is set at 14,000rpm peak power, but the spin’s best around 10,000 and feels to produce most torque in this rev range. At those revs progress down the runway was rapid. The bike carried fairly high gearing, John Chapman was to ride it in the parades at the Post TT Billown meeting later in the week, and it proved perfect for Jurby’s long straights.

Hauling the bike up at the end of the long straight was a fuss free operation, even when a lapse in concentration while trying to outrun a modern race 250 found me way past my normal braking marker. According to John the Grant tune on the brakes has turned good into great.

A brief stop at the paddock proved to be a mistake. I was hoisted out of the saddle and John McGuinness took the RC181 out for a lap or two. And he returned with a grin on his face as wide as mine had been earlier. Unprompted he described the Honda as feeling like ‘a real race bike’. Exactly! Quite a compliment from a man who was set to become the fastest man in TT history and raised the TT lap record to an amazing 130mph later in the week.

From the well sorted suspension, thankfully John Chapman is a well built lad like myself, through to the action of the controls this is a race bike, but one that just happens to be a replica of one of the sport’s most iconic models.

Tech spec
You have to look very closely at this RC181 replica to spot its original bloodline. What started, at least the engine that is, as a humble CBX550 has the classic lines of a full factory Grand Prix machine.

When the RC181 replica builder, Hungarian Ronald Agoston, started out on the project, his mechanical skills were self taught; in real life he had been running a successful building company until pressure of work and ill health persuaded him to sell the business. Now Ronald concentrates on building superb racing motorcycles.

Starting with the CBX550 and using its crankshaft with the cylinders of the CBX400 this gave Ronald a bore and stroke of 55mm x 52mm which gives an overall capacity of 494.2cc. The original RC181 was 57mm x 48mm, 489cc. The double overhead camshaft was then converted to chain drive, from the original CBX shaft. But the big change, which gives the motor such aesthetic appeal and makes it look so authentic is the way that the engine casings have been remachined to mirror the original factory RC181. You have to study hard to recognise anything CBX550 about the finished product.

The cycle parts have had just as much time spent on them as the mechanics. After hours studying and taking measurements from period photographs of the RC181, Ronald finally got to measure the real thing in a British museum. With all the information to hand he then recreated the frame, suspension, brakes and fuel tank from scratch.

After the initial bike was built Ronald was lucky enough to have Jim Redman, who had raced the original RC181 during the 60s, ride it at a classic race event in Switzerland. And he was impressed. Redman declared Ronald’s bike nearer in feel to the original than all the other replicas he had ridden in recent times, saying "it is close to the original". To date, around 10 of the RC181 500cc replicas have been built in the three or so years since Ronald decided to build the original.

The real deal
As little more than a schoolboy, in the mid 60s, when Honda unveiled the original RC181 onto the racing world, the memory that remains strongest is the bike press headlines that proclaimed the RC181 ‘unrideable’ and ‘too powerful for the TT circuit’ and that was with the late great Mike Hailwood aboard and a claimed 100 plus brake horse power on tap. 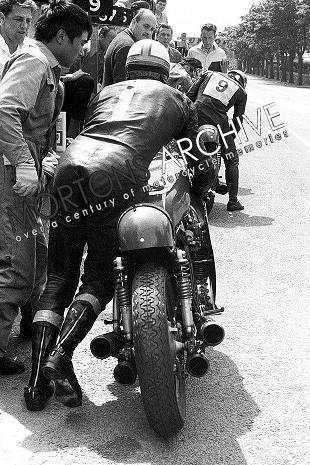 My first sight of the real RC181 was during the 1967 Senior TT, my first ever visit to the Isle of Man. And from where we were sitting, on the bank at Cronk ny Mona, it did indeed look as if the pundits of the press were right.

On his first pass Mike the Bike was fighting for his very survival as the Honda did all it could to unseat him on the 120mph left-hander. By comparison Giacomo Agostini looked like he was out for a Sunday afternoon ride on the sweet handling MV Agusta. Little wonder that the young Italian heartthrob led Mike by several seconds. Of course the end result had Mike winning the race after a hand blistering six laps, but only after Agostini had been forced to retire with a broken chain.

Development continued on the RC181 and to a degree it was tamed, but it failed to deliver Honda the 500cc world title they wanted so badly to wrest from MV Agusta. Although both Jim Redman and Mike Hailwood won races on the RC181, the best positions they delivered with it was a runner-up spot in 1966 for Hailwood, with Redman fifth and a championship second once again for Mike in 1967.

At the end of the 1967 season, Honda withdrew from Grand Prix racing and the RC181 was consigned to the role of museum piece.