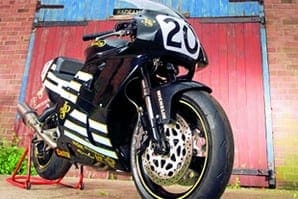 The Donington Park based factory outfit has signed Nottingham's Dan Hegarty. Dan will partner Runcorn based Ian Mackman who will return to the TT on Norton's distinctive SG1 for his second year.

Mackman, the 2011 TT Privateer champion became the first rider for 20 years to qualify a factory built Norton machine for a race during the 2012 TT Races. However, he was unable to race the V4 machine as the Senior TT was cancelled due to bad weather.

Dan said, “It’s great to get a factory ride and have the opportunity to be in at the beginning of the development programme for Norton. I also look forward to working alongside Mackers who I have raced alongside before and have a great relationship with.”