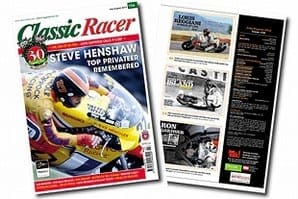 • Archive Shot: twenty four hour Triton
Despite the enormity of the victory you would be hard pushed to find mention of the Barcelona 24 Hour race in the period motorcycle press when Dave Degens and team-mate Ian Goddard stormed to victory in the gruelling event. Malc Wheeler tells the story.

• An hour with Giacomo Agostini
Working in a world filled with racing heroes from the past it’s easy to take it for granted that you’ll be having a brew with a former world champion. Or rather that’s what Bruce Wilson thought until he met a true legend, Giacomo Agostini.

• Loris Capirossi
After starting racing in the late 1980s Loris Capirossi, who grew up near Imola, quickly progressed, winning the Italian Honda 125 championship and by 1990, aged just 17, he was 125cc world champion, the youngest rider to ever to claim a world title, a record he still holds. Norm DeWitt charts Capirossi’s rise to fame.

• Steve Henshaw
From a career that began in 1977 Nottinghamshire‘s Steve Henshaw quickly became one of the finest privateers in the UK. The Jacksdale ace was a regular frontrunner in the red, yellow and blue colours of Wiltshire chicken farmer Harold Coppock and was widely recognised as one of the most popular, highly respected competitors within the sport. Phil Wain takes up the story..

• Ron Gardner
Ron Gardner is probably responsible for more race wins than anyone else in the sport. Alan Turner tells the tale of a modest genius.

• News from the Island
When typewriters still ruled and journalists still licked their pencils Pete Kelly got his first TT assignment. He shares the excitement with us.

Plus all the usual favourites and columnists. On sale now!