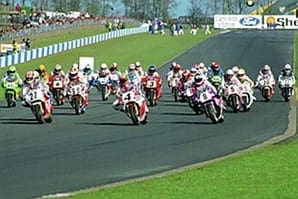 After listening to the spectators the decision was made to step forward in time by adding the naked Superbikes that were raced in the US by legends like Freddie Spencer, Wes Cooley, Wayne Rainey and Eddie Lawson and the early World Superbike machines which will appeal to a wider audience and take Bikers’ Classics into another exciting bike racing era.

Support from regular participating teams to the idea has been incredible and across Europe Superbikes are being built and restored and interest from former WSB stars has been equally strong.

Despite the move forward, the legendary bikes and riders from the Fifties and Sixties won’t miss out nor will Grand Prix machines of the Seventies and Eighties. The four Hours of Spa, which has proved so popular, will also continue in 2012. “It is time for a change, Degecom CEO Christian Jupsin said: “When we started the Bikers' Classics we wanted this Spa-Francorchamps event to become the benchmark in classic racing by always pushing the envelope.

“I think it is safe to say that we have succeeded in doing so. But somehow we felt we had to listen to people who said they enjoyed the Bikers’ Classics, but they were eager to see something really new. By putting the spotlights on the first era of Superbike racing in America and also on the first years of the Superbike World Championship I am confident the Bikers’ Classics will please annual visitors and also attract a new crowd.”

If you have an AMA style Superbike or early WSB racer, and fancy loaning it to a guest rider for the weekend contact the organisers via their website www.bikersclassic.be

NB: You can read a full interview with Christian Jupsin in the next issue of Classic Racer magazine, as he explains his passion for classics and his vision for the future.